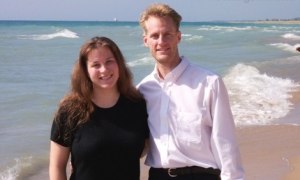 This ministry began with Ryan and Kelly McCoy, a husband and wife team in 2002 .  We started out by recording and sharing 3ABN videos on DVD as a way to witness. Since that time we have expanded into many other areas. We now offer seminars, videos & audio, sermons, studies, and informative end time news

.  Several other Seventh-day Adventists have volunteered some of their time to assist in some of the larger projects that are being brought to completion.  And more volunteers are always welcome.

Kelly and Ryan are members of Middleton Seventh-day Adventist Church

and are members in good standing.

In April 2010, Sealing Time Ministries purchased a 2 acre property in the country with a 1568 sq. foot home/office.  Future plans include a large building with offices and a film studio.  From this location affectionately nicknamed the "Idaho Outpost" Sealing Time Ministries will continue to work to produce high quality, excellent video, audio and study materials designed to bring more people to decisions for Christ.
"The cities are to be worked from outposts. Said the messenger of God, "Shall not the cities be warned? Yes; not by God's people living in them, but by their visiting them, to warn them of what is coming upon the earth." --Letter 182, 1902

In 2008 Sealing Time Ministries launched our Multimedia Production Services department.  This new aspect of ministry works with churches, conferences, and other supporting organizations of the Seventh-day Adventist church to produce high quality video, audio and IPTV internet broadcasts worldwide for various evangelistic and revival events.  We are also developing some excellent programming as well as in depth presentation videos about the final events that we will eventually develop into a highly detailed series of compelling videos that will walk through the final events in a way that anyone can understand, but with a depth even the most studied Adventist can appreciate.

In May of 2006 we went with a team from our church for a mission trip to Panama City, Panama, to run several evangelistic series.  We ran two successful series, our pastor speaking at one church on the subject of health reform, and Ryan running a complete Daniel & Revelation series at the other.  As a result of these series a total of 12 people were baptized and it was an amazing experience.  On the "Ten Commandment Day" Sabbath, Ryan had the unique experience of speaking at four churches in one day, one of them being a youth convocation that night.

Originally we had simply named this ministry “Kelly and Ryan's Ministry.” But as time passed, we decided our ministry needed a more official name. After much thought it seemed that every ministry name we could think of had been taken. As Ryan was studying one night, he read this quote “The Sealing Time is very short and will soon be over.” EW 58.2  Late that night while Ryan was sleeping he was impressed to get up and check if anyone was using that name (Sealing Time Ministries). Ryan checked and could not find anyone using it, so he checked to see if the web domain was available. It was available! So we went ahead and purchased www.SealingTime.com

, and Sealing Time Ministries now had it's own name.  Since that time, we have been impressed many times late at night to wake up and buy many other domains that will contain very timely study information as the final crisis develops.

Tests of a Prophet

The Great Controversy
The Truth about Death

Islam in Prophecy
The Latter Rain
The Truth about Mary

Islam and Christianity in Prophecy - The Third and Final Conflict - Tim Roosenberg (DVD)
$10.00